It was hard to leave Haines because I was comfortable there. Going into Canada, without even a decent map was like going off the edge of the earth. I had 74 miles of EV, the most the car had ever charged to. The road at first wasn’t bad but it was a very long road and I was often impatient and bored despite the beauty.

I made it as far as a government campground (12$ Canadian before I even had to think about the rate of exchange.) Here the bitey flies and bees made for an imperfect stay but at least there was the Million Dollar Falls (more like 100 Dollar Falls if truth be told.) I set up camp with all my bear fears surrounding me—I peed the perimeter, slept with the car alarm, the bear mace, my walking stick and my faithful dog and a neighbor not far away. I carefully laid out everything I would need to reach emergently in the dark but in the long sunset and later the faux dark I realized this far north it doesn’t really get dark. I set my alarm for midnight but the moon was still out, doing a very low Southern arc, but after that it was still light out and before 4am I looked at the clock since I was having so much trouble sleeping with it being so light. I finally wrapped my eyes in my scarf and got a little more sleep. 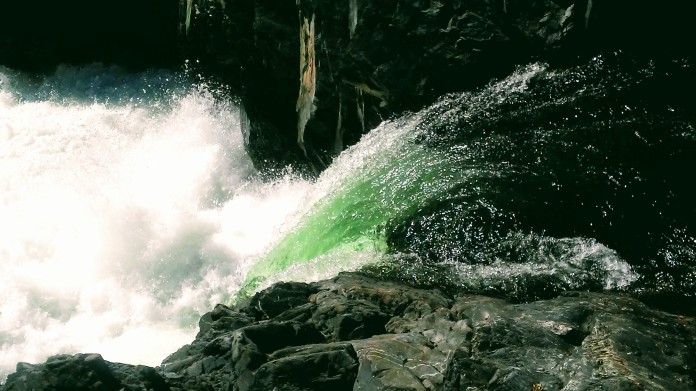 In Haines Junction I decided to go wimp after seeing the buff young guys at the Backpackers Hostel. I just wasn’t up for it. My motel was 85$ Canadian and 69$ US. A budget buster but good night’s sleep. This morning my mosquito bites are less insistent and the view out the window is peaceful but the sounds of the Alcan Highway out front remind me that I have an hour to vacate and take up the road again. Three weeks more of travel and I feel burned out from driving and living out of the car. I’m sitting this hour with my reality… sniffing the sweet air and grounding with what is rather than some negative projection. This could be my last great adventure.

Yesterday Selk and I had two short hikes, one up to the rocks at the front end of an ancient glacier (edge of Kluane National Park) and the next along the Dezadeash River walking distance from the motel and the pub where I had dinner.