Orien left Chico with Keith this afternoon to visit friends in Sacramento and S.F. as they head back to Phoenix. 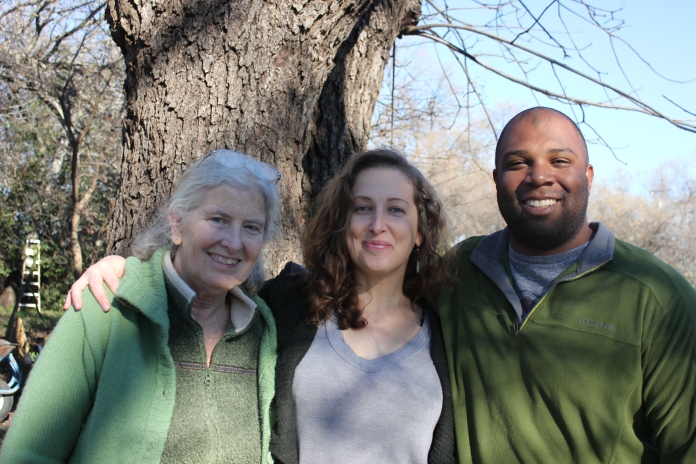 I’ve gorged on left overs and now have to determine if I want to work on upcoming radio marathons (4 hours on Thursday the 31st and an hour and a half on Friday, the first,) or write here since so much family time has passed over the Holidays since I’ve written anything.

I have been busy. Cathy Webster and I tabled at the Climate Change rally after the Paris talks. 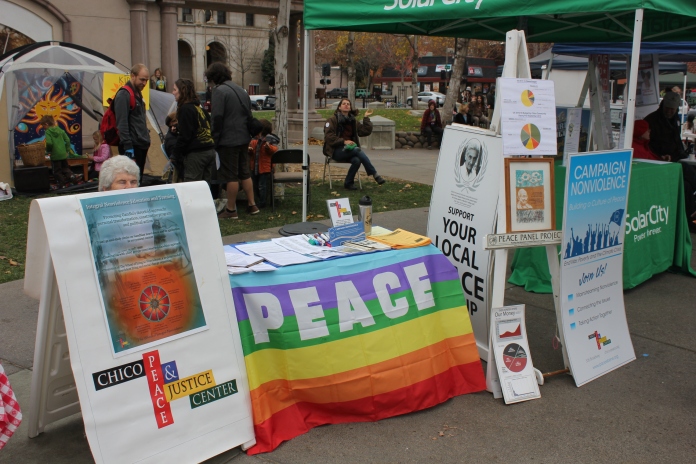 Chico 350 estimated a thousand people came to the rally but it is a buzz to me. Cathy and I did a Pledge to help people who wanted a focus—

I will strive to:

In support of this—I will:

***Join at least one local peace or environmental group as an active member, such as:

***Take Non-violence Training in order to become knowledgeable and grounded in the tactics of Nonviolence:

Read books on the power of Nonviolence

*** Look for opportunities to Mainstream Nonviolence in our homes and communities and actively seek to Connect the Dots between Poverty, Militarism and Climate Change.

That was on Saturday the 12th then our monthly Occupy Beale protest was on Monday. Our theme, besides the brutality and illegality of the global drone assassination program, was on the exemption of the massive military from any climate savings fossil fuel reductions. This small group was arrested Monday afternoon in solidarity with those in Paris who protested by drawing a red line against further polluters.

Then we were arrested in the freezing dawn Tuesday. My sign reads War is Environmental Disaster.

Soon after the 15 of us were arrested, about 9 of us got Notices to Appear for Sept. Beale arrests.

The little grip of stress about that tightened when Orien got home and started quizzing me on what I was going to do and getting an attorney. I hadn’t even thought about it yet but Arraignment is on Jan. 12th when we will be delivering a Real State of the Union address at the Federal Court House in Sacramento along with our pleas.

There were some nice rains and beautiful Solstice calm before the inevitable outbreak of Christmas and Orien birthday scurry.

How I love it that she and Keith were here! We didn’t do anything overly amazing but just their nearness filled my heart and my days. We did the Bird Tree tradition on Christmas

and went up to the snow. 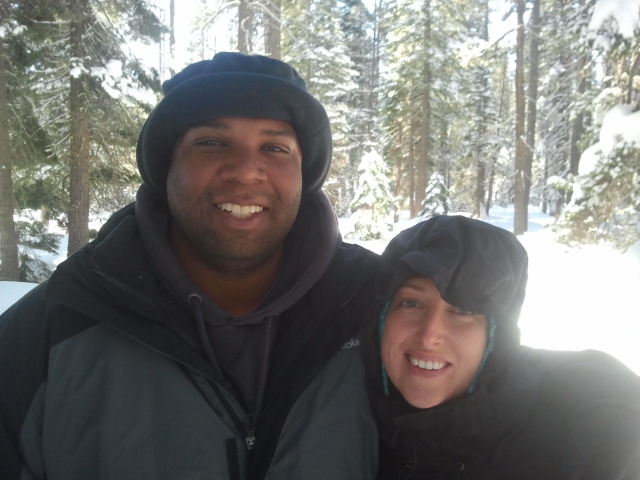 It is 10 years since mom died on Christmas Eve day and Orien also turned 35 on Christmas Eve, which is pretty smack dab adult. Michael is embedded and enshrined in my heart like a precious stone I realize, always there. Today the young woman of the couple who bought the cab over of our Veggie Voyager wrote about their adventures and I was gratified… folks after our own hearts.

I’m glad 2015 is going away. I know every day of good health is precious and I don’t want to rush a thing but I am glad to put distance from Michael’s death. I’m grateful that I survived the year and did as many wonderful things as I did. I look back with some awe at how I got myself out into the world and all the new good memories that were created. When I crack open 2016 I want to have an open heart and a willingness to be as healthy as I can and to do as many positive things as possible within balance of my own body and spirit. I hope your path will be clear of impediments too and filled with Peace.

This is a random photo of Michael and Sasha on an abandoned, broken down snowmobile on Shasta. So many happy snow memories with them!

Last night I went to hear a discussion at Chico State then took myself out for Indian food. It was a cold night and I have a sinusitis so I had a Chi tea which was delicious but kept me up all night. Today I hosted the Peace and Justice program on community radio (archived at http://www.kzfr.org) and that was a hurdle because getting out the word about why we must be actively engaged in saving our planet is so crucial. It is always a strain and I never know how it has gone. It is like cramming for a big test but relief usually doesn’t follow because the topics are usually so triggering (like climate change, drone assassination, water privatization.) Anyway, the evening was supposed to end at Safe Space where I was scheduled to be a monitor until 1am but someone else wanted the shift so I gratefully relinquished but now the space of this evening stretches in front of me. I’ve ruled out going out and I tried calling one friend who didn’t pick up. There isn’t even a fire laid… So, here I am in stillness holding awkwardly within the space of quiet. These winter nights are really long….

The photo above is me, the old lady, with my only brother, Warren, saying goodbye. 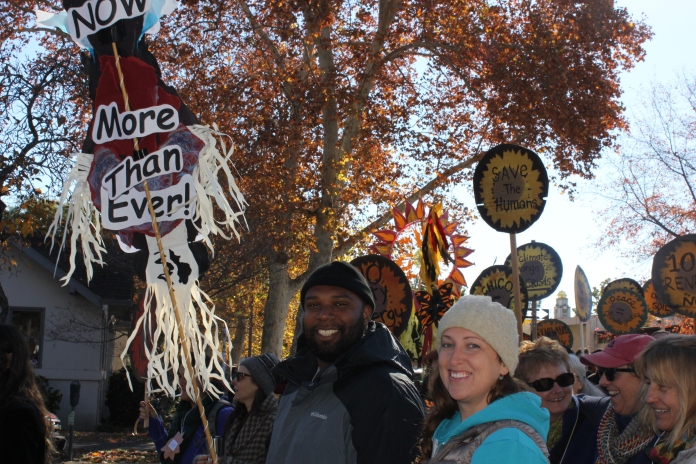 After my family left Keith came and he and Orien participated in a Chico Climate march last weekend after the Thanksgiving feasting. Then they left to go back to Phoenix. (Leaving me with lots of left overs which I have just now finally polished off. I’ve decided though– no more dairy or eggs after seeing the film Cowspiracy so a new chapter opens as the frig empties out.)

During all the hoopla of the visits a woman named Joan Buell got hold of me. Her husband had known Michael in Vietnam and she had amazing new revelations that I had never heard before. (And she sent me this picture.) She said that her husband Eldon, who is holding one of his grandbabies below and who has also died of Vietnam initiated illness, had said his best memories of Vietnam were with Michael. Everyone called him by a word that means “doctor” and Eldon had been a medic in a clinic where they even delivered babies. Joan said that the children of the men Michael served with survived because he cared and that Michael was a hero. Her information surprised me only because I had not heard about his friendships but I’m sure he did do everything in his power to protect those he bonded with. That was very much in his nature. I love this photo of Eldon and feel sorrow and connection with Joan. Her contact meant a lot to me but I didn’t have a lot of time to really feel the pull of it til everyone left.

I think idle thoughts of Michael all the time. He pops into my head with a little vignette of something we did or a way he would have responded in a situation. Despite staying busy I miss our old life at many a turn, especially when I know there is snow in the high country or I can’t get the car fixed well enough to smog. My heart is alternating like this thin bleached leaf and this split isolated rusted bronze hanging thing with the glory of life in the background. 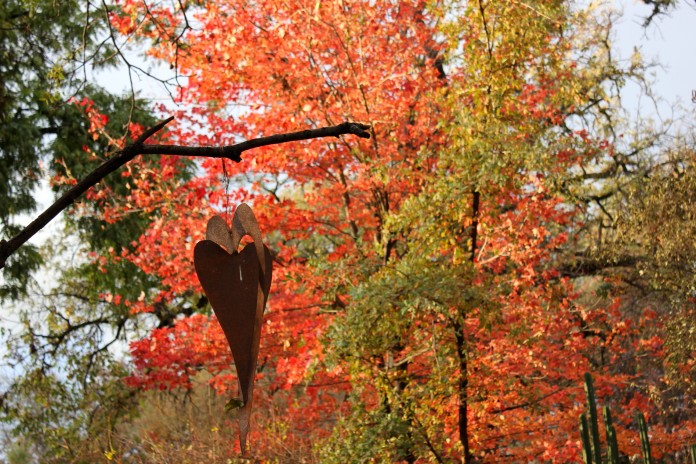 After the recent rain Selk and I went down to the creek to the exact place Michael and I went on our last walk together. The beauty of the fall changes took my real heart to a level that emotional pain infused with beauty often does… an ache of appreciation for all that remains that is pure and good and in the moment and season of how it should be. 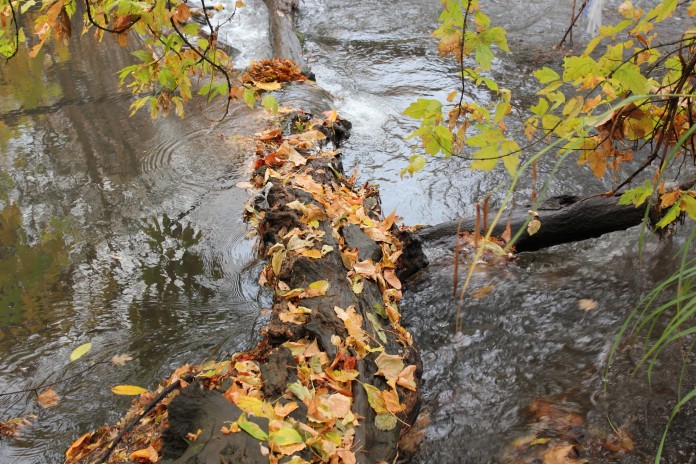 The things that are consistent for me are Selkie and the house. The house may look odd to you and I’m not sure about it either but it is wonderful having a fresh coat of paint and stain for whatever comes next and the sense of this space inside for the better or worse of my own existence. 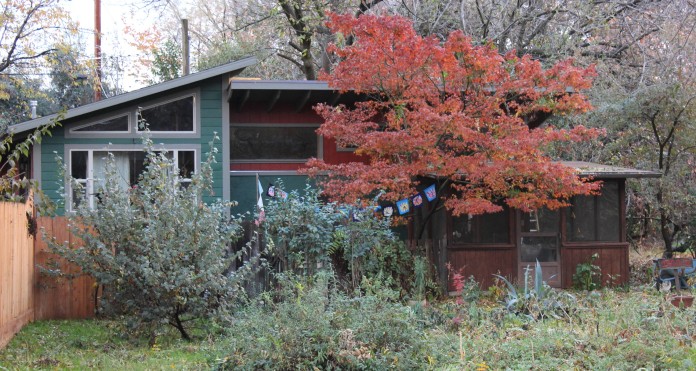